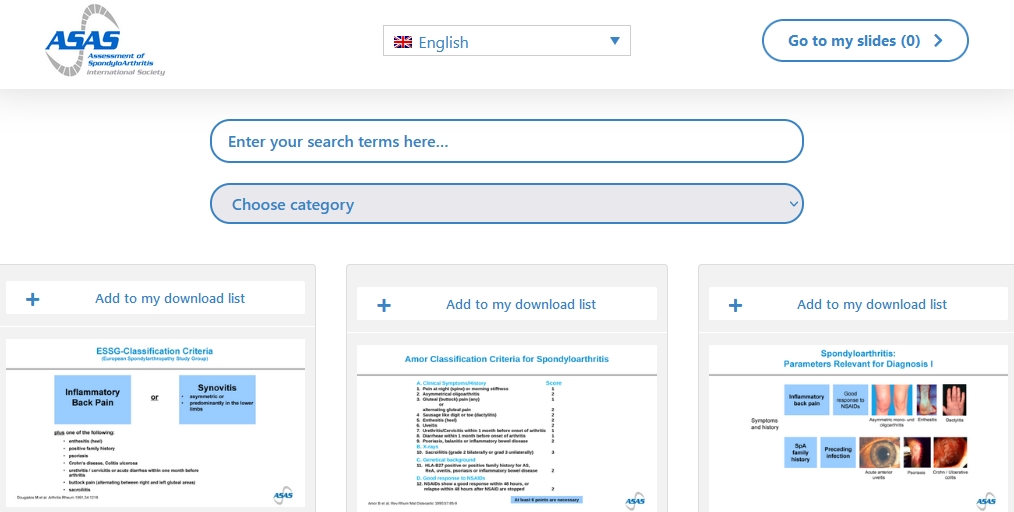 The slides included in this ASAS slide library are selected by ASAS members to give a broad overview of the various aspects of spondyloarthritis (SpA). We hope that these will be used widely to educate all health professionals caring for patients with SpA.

There are ten sections:

Slides in the English version can be selected by using search terms (either keywords or any word) and by chapters, in other languages only by chapters. Original slides without changing the content and lay-out can be used freely.

We tried to have the content of the slides as accurate as possible but ASAS is not ‘legally responsible’ for any mistakes which might have occurred.

The lay-out and technical aspects were performed by LP Concept GmbH.

We thank the following ASAS members for their contribution to the current version of the Slide Library as a working group members:
Xenofon Baraliakos, Rik Lories, Irene van der Horst-Bruinsma.

The overall supervision was in hands of Joachim Sieper, Désirée van der Heijde, and Denis Poddubnyy, update and translations were coordinated by Mikhail Protopopov.

For figures from some journals we acknowledge the publisher as follows:

If you are under 16 and wish to give consent to optional services, you must ask your legal guardians for permission. We use cookies and other technologies on our website. Some of them are essential, while others help us to improve this website and your experience. Personal data may be processed (e.g. IP addresses), for example for personalized ads and content or ad and content measurement. You can find more information about the use of your data in our privacy policy. Here you will find an overview of all cookies used. You can give your consent to whole categories or display further information and select certain cookies.